Zeynep Oguz has been awarded the Wenner-Gren Foundation’s Post-PhD Research Grant for her project “The Island to Come: Geopolitical Disputes, Offshore Hydrocarbons, and Political Futures in a Divided Cyprus.” 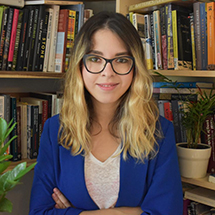 Oguz is Postdoctoral Fellow in Environmental Humanities of the Kaplan Humanities Institute and the Department of Anthropology at Northwestern. Located at the intersection of environmental anthropology, political geography, and Science and Technology Studies (STS), her work examines the ways in which politics and earth intersect. In addition to her research, Oguz will teach two undergraduate courses in 2020-2021: "Fire and Blood: Resources, Energy, and Society" and "Becoming Planetary: Earth, Power, Imagination."

A brief abstract of the project is below.

The Island to Come: Geopolitical Disputes, Offshore Hydrocarbons, and Political Futures in a Divided Cyprus

From British colonial rule (1878-1960) to the ongoing Turkish occupation since 1974, the politically divided island of Cyprus has been in the midst of geopolitical conflicts in the Mediterranean Sea. Recently, significant offshore natural gas reserves have been discovered in Cypriot waters, exacerbating existing disputes and bringing global attention to the Cyprus dispute. These debates, however, rarely explore what Cypriots—the Turkish and Greek inhabitants of the entire island—envision for their political and environmental future in the wake of these discoveries. Taking “Cypriots” as all inhabitants of the island regardless of ethnic, religious, or political status, this six-month research project examines how Cypriots are recasting their political futures in relation to the hydrocarbon discoveries in the eastern Mediterranean Sea. Building upon critical approaches to geopolitics, sovereignty, and territory in political anthropology and geography, energy humanities, and critical studies of oceans and islands, this project attends to the political imaginaries in Cyprus that go beyond the hegemonic analyses of the Cyprus dispute and offshore hydrocarbon prospects. In a period of planetary ecological crisis caused by systematic fossil fuel use, a critical and experimental anthropological take on the intersection of fossil fuel politics and political-territorial futures becomes even more urgent.

The program contributes to the Foundation's overall mission to support basic research in anthropology and to ensure that the discipline continues to be a source of vibrant and significant work that furthers understanding of humanity's cultural and biological origins, development, and variation. The Foundation supports research that demonstrates a clear link to anthropological theory and debates, and promises to make a solid contribution to advancing these ideas.